On Monday, the Oklahoma City Thunder defeated the Utah Jazz, 98-89. While the showdown between the potential playoff teams was a subject of discussion this week, it was not because of what happened on the court. A video surfaced that showed Thunder guard Russell Westbrook threatening two fans, with very strong language being used. The video can be found below, but there is inappropriate language used throughout.

Things get heated between Russell Westbrook and Utah Jazz fans again. “I’ll f*ck you up. You and your wife,” he says. Not sure what these fans said to him, but he also had issues with Jazz fans during the postseason. pic.twitter.com/LquwRmLVNy

After the game, some of Westbrook’s teammates and opponents came to his defense, saying they heard the offensive comments and wanted to know how they were being protected as players. Westbrook and Jazz fans are no strangers to controversy, with Westbrook being criticized last year for slapping at a fan’s phone after a playoff game. It appeared this event would take the same path, with Westbrook receiving a $25,000 fine from the NBA. However, the discovery of Shane Kiesel’s social media posts completely changed the situation.

Because of the strong content, I will not be sharing links to the posts by Kiesel. I will leave it at this: racial slurs, offensive comments, and blatant disrespect are evident throughout. With this discovery, many came to the defense of Westbrook, such as USA Today’s Nate Scott (2019), who writes “The point guard screaming at the fan isn’t just an immature malcontent, especially when the fan allegedly said something horrible and has a history that appears to show extremely racist and violent thinking” (para. 13). Scott also mentions this is “one of those instances where I am glad we have the internet. Fifteen years ago, we would have labeled Russell Westbrook a problem or worse for what he yelled at a fan on Monday night. Today, we can (more quickly and easily) learn about the fan, and begin to understand and empathize with, if not exactly condone, what Westbrook did” (para. 6).

While Russell Westbrook’s comments were very inappropriate, they were nowhere near the level of offensiveness that Kiesel portrayed on social media. Like Nate Scott mentioned, this is a circumstance that was sorted out largely because of social media. Today, social media, especially Twitter, can be a blessing and a curse. With little to no context, we saw a video of an NBA star yelling profanities at a married couple. It is very easy to make assumptions based on this single video, but we are fortunate more information was brought to light. With news being spread as quickly as possible on social media, it is difficult to see the entire scope of every situation. Thankfully, media members in Utah and Oklahoma City were able to investigate the entirety of the situation. Because of their work, we are now aware that the video portrays NBA star Russell Westbrook standing up for himself against Shane Kiesel, a very racist spectator.

Note: The picture below is a screenshot of a statement from the Utah Jazz, which permanently banned Shane Kiesel from attending any events held in the Vivant Smart Home Arena. 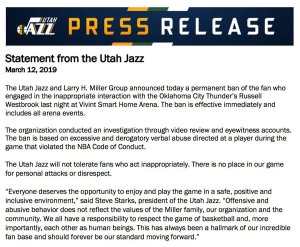 Scott, N. (2019, March 12). Russell Westbrook threatened a Jazz fan, but then we learned about the fan. USAToday.com. Retrieved from https://ftw.usatoday.com/2019/03/russell-westbrook-jazz?utm_source=ftw&utm_medium=recirc&utm_campaign=rail-most-popular