David Dietrich is a second-year undergraduate student at Bowling Green State University. The Tiffin, Ohio native is a Sport Management major, with a minor in journalism. His primary sports interests are football, basketball, and baseball, at both collegiate and professional levels. 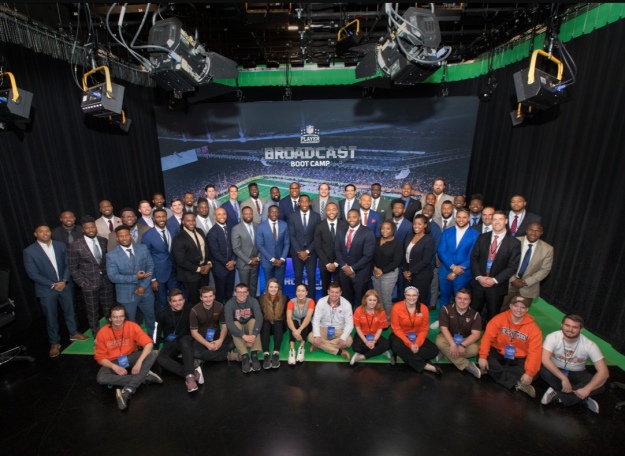 Earlier in April, I had the opportunity to be a student ambassador for the NFL Broadcast Boot Camp. For three days, I guided current and former NFL players around BGSU’s campus where they were trained in different aspects of sport media. During this time, I was able to observe some of the unique simulations that occurred in our facilities. The different types of training included TV studio and radio recordings, discussions about fair coverage, and analytical approaches that can be used with the newest technology.

For me, one of the biggest takeaways from this week was the demand for simplicity from the NFL’s representatives. All 39 players in attendance know that game inside and out, so they were instructed to explain everything in a way “a smart 5th grader” would understand. Early in the week, several players used the technical terms for coverages and routes, which would not be understood by the common viewer. As the week progressed, the players improved in this aspect and began speaking in a way that is normally heard on the NFL’s television or radio broadcasts.

Another thing that stood out to me was the kindness of everyone involved. There were 39 players, some who will continue playing next season, and some who may have an appearance in Canton in their future. There were countless NFL media members, including some of the biggest producers and hosts in the business. Regardless of their status, each person treated me and the rest of the BGSU students and faculty with respect, often smiling and thanking us for our help. Some went as far as introducing themselves, despite being so recognizable they needed no introduction. They asked questions about my background, experiences, and goals, and seemed genuinely interested in what I wanted to do in the future.

On the final day, I spoke with many players about our shared love for sports and our shared interest in the media. Despite wildly different backgrounds, we were all on the early stages of a similar career path. We all have a goal to work somewhere in sport media and the Broadcast Boot Camp provided some very valuable experiences as we progress towards our goals. Overall, this was one of the most informative and fulfilling experiences of my career, and I am very thankful BGSU and the Maxwell Media Watch was able to provide me with this opportunity.