Tennis commentator John McEnroe called it the greatest story in sports history. Not just in women’s sports, or women’s tennis, but in all of sports’ history! And he wasn’t alone in proclaiming it. On Thursday, January 26, all four ESPN panelists on ‘Around the Horn’ agreed. They were referring to the story of 36-year old Venus Williams and 35-year old Serena Williams, the famous “Sister Act” who were to meet in their 27th head-to-head match in the Women’s Singles final at the 2017 Australian Open. It was part of an historical weekend of tennis that also featured two thirtysomething players in the Men’s final: 35-year old Roger Federer vs. 30-year old Rafa Nadal. By most standards, tennis players in their mid-30s are thought of as over-the-hill. In this case, it was ‘must-see TV’ and tennis was the better for it. Not only were they four of the best players of all time, but they have dominated tennis for over a decade, “winning a combined total of 60 majors in their careers” (Bialik, 2017, para. 1). 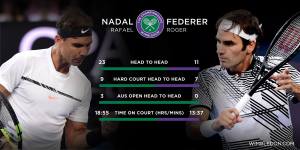 The Results? In the weekend matches, Serena edged out older sister Venus, 6-4, 6-4, while Roger needed five sets to prevail over Rafa, 6-4, 3-6, 6-1, 3-6, 6-3. Winning another major title brought Serena’s total number to 23 majors, surpassing Steffi Graf (22), and trailing only Margaret Court, the Australian, who holds 24 titles. Besides adding to her numbers, Serena reclaimed the World No. 1 ranking this week, after what was (for her) a disappointing 2016 season. Now that she is healthy Serena could conceivably tie and maybe even surpass Margaret Court in 2017.

The 2017 Australian Open men’s and women’s finals were nostalgic for fans. My biggest regret was that I didn’t attend this year’s tournament in Australia. Ten years ago, I was at the Australian Open for both finals. Guess who won? The same two: Serena won the Women’s singles over Maria Sharapova, 6-1, 6-2, while Roger defeated Fernando Gonzalez, 7-6 (2), 6-4, 6-4 to win the Men’s singles.

The Williams sisters’ rivalry as well as the pairing of Roger and Rafa demonstrate the longevity of their careers. Venus and Serena have faced each other 27 times, while Roger and Rafa have played 35 times. Neither can truly be considered the ‘greatest tennis rivalry’ in terms of the number of times they have played. Chris Evert and Martina Navratilova hold that distinction, having met 80 times between 1973 and 1989.

So, why do multiple sports writers believe the Williams’ sisters’ story may be “the greatest sports story” ever? (Simons, 2017)?

For those who have followed the Williams’ sisters throughout their careers, it is evident that all the elements of a great story are there: a compelling orientation, a crisis, escalation, discovery, and change (Klems, 2014). Below I elaborate on how the Williams sisters’ story demonstrates each of those elements – and how the media reported on them.

The beginning of a good story needs to “grab the reader’s attention,” and orient us to “the setting, mood and tone of the story” (Klems, 2014, para. 15). In 1991, Sports Illustrated writer Sonia Steptoe (1991) introduced 10-year old Venus as “the most hotly pursued preteen in U.S. tennis history” (para. 5). We learned that Venus hailed from Compton, CA (as in “Straight-out-of-Compton” fame) where she lived in “a small mint-green house… spray-painted with black graffiti.” There she dreamed “of wearing a white dress and playing tennis on the grass courts at Wimbledon” (para. 2). Americans were looking for the next great superstar to fill the void left by Chris Evert’s retirement. Venus’ coach, Rick Macci likened her athleticism to ‘His Airness,’ Michael Jordan. The anticipation of this “Cinderella of the Ghetto,” as her father referred to her, established her promise as the future of tennis. Her father, Richard, also suggested that younger sister Serena would be even better than Venus!

The second ingredient of a good story is a “crisis that tips your character’s world upside down,” and she cannot immediately resolve the crisis (para. 19). While Venus faced a series of mini-crises in her early career, none rose to the level of unresolvable until 2001, when she and Serena were slated to meet in the semi-finals at Indian Wells, a tournament that was a family favorite due to its proximity to Compton. It was where Serena had won her first professional match. By 2001, Venus and Serena had each won a grand slam tournament – Serena won the 1999 U.S. Open, while Venus captured the 2000 Wimbledon title. When they arrived at Indian Wells, there was great anticipation among fans to see their match that was to be aired live on ESPN. Dominant reports conveyed that moments before their scheduled match was to begin, Venus defaulted, leading some to believe that their father Richard had orchestrated the default, although that suspicion has never been substantiated. Given the disappointment of fans, the announcement was met with harsh booing from the crowd (Smith, 2001). Two days later, when Serena appeared for the final against Kim Clijsters, fans again greeted her with loud boos. And when Venus and Richard entered the court, the booing increased and some fans were heard shouting racial epithets. Richard Williams reported that one fan told him he was ‘lucky it wasn’t 1975,’ or he would ‘skin him alive’ (Smith, 2001, p. 3C).

In an interview with Doug Smith, of USA Today, Richard “accused the media of biased coverage of his family and said ESPN announcers (Pam Shriver and Mary Joe Fernandez) were derelict for failing to criticize the behavior of Indian Wells’ fans when Serena defeated Cljisters” (p. 3C). During the match, Shriver and Fernandez had described the environment as ‘unlike anything they had ever seen.’ Although Serena somehow prevailed to win in three sets, fans continued to boo her throughout the trophy presentation, even as then-19-year old Serena told the crowd that she loved them. In the aftermath of that traumatic experience, Richard vowed never to return to Indian Wells (Smith, 2001).

In 2009, Serena revealed in her autobiography that Venus had informed tournament officials that she was injured earlier in the day of their scheduled semifinal, adding that she would not be able to play the match. However, given the delay (by tournament officials) in announcing her withdrawal until just before the match, Venus (and her father) were vilified by the crowd. Unfortunately, Serena bore the brunt of it. In retrospect, Serena could not understand why a tournament official did not make an announcement or seek to quiet the crowd by telling them that Venus was truly injured. She described it as one of the ‘darkest moments of her career.’

The third element of a good story involves an escalation of the crisis, which occurred in the Williams’ saga when the Women’s Tennis Association (WTA) introduced the “Road Map” in 2008 (Evans, 2008). That plan was implemented to reduce the number of player withdrawals and to encourage players to make greater commitments to tournaments. The aim of the guidelines was to make the tour more ‘fan friendly’ by ensuring that top-ranked players would appear in major tournaments. Another feature of the new plan was the designation of five tournaments as ‘premier mandatory’ events, which meant the prize money would be greater than all except the grand slams, and players would be required to enter, barring injury. When Indian Wells was designated as ‘premier mandatory,’ some speculated that it was done in part to encourage the return of the Williams sisters to Indian Wells. Despite the WTA’s efforts to encourage their return, Venus and Serena remained steadfast in their refusal to play at Indian Wells, and their boycott continued. Many in the media expressed the view that the Williams sisters should return to Indian Wells, as indicated here: “There comes a time when bygones should be bygones. Venus and Serena have made their point… it is time for the sisters to return to the California desert with their heads held high and lingering slights, nasty as they were, forgotten” (Evans, 2008, para. 12).

The fourth ingredient of a good story entails discovery, which occurs as “the climax of the story,” when the protagonist(s) “make(s) a discovery that changes (her) life” (para. 41). In February 2015, Serena announced that she would end her 14-year boycott and return to Indian Wells. She attributed her change of heart to Nelson Mandela’s impact upon her life. His example, coupled with lessons she had learned from her mother, enabled her to realize the power of forgiveness. In contrast to the scene of the 2001 tourney, Serena was greeted with cheers and a standing ovation. Although nervous in her first match, she won it and advanced to the semifinals before having to default due to injury. This time she appeared on court before the match to explain to fans what happened, and the fans had a more positive response. According to Thomas (2015), “You could hear a few scattered boos, unbelievably and too predictably, but mostly there was applause” (para. 20).

Finally, a good story reflects change in the protagonist when she is “transformed into someone more mature, insightful or at peace” (para. 48). Serena’s change of heart was noted by USTA President Katrina Adams who said, “Serena’s decision to return is another sign of her maturity in understanding that although many people show signs of ignorance, not all are (ignorant),” Adams added that, “The past is history, but the present is a gift. She has millions of fans in California that would love to see her play in person, and what a treat they will be in for” (Clarey, 2015, para. 16). While most of the media attention focused on Serena’s change of heart and growth in maturity, there was little if any mention that perhaps Indian Wells needed to apologize publicly for the inappropriate behavior that occurred at Indian Wells in 2001, if for no other reason than to assure Venus and Serena that such a response would never happen again. After Serena’s positive experience upon returning in 2015, her older sister Venus decided to return in 2016. She too experienced the love and appreciation of fans upon her return to the court.

The story of how the Williams’ sisters overcame the crisis at Indian Wells is only one chapter of the compelling story of their 20-year careers in professional women’s tennis. That is probably why so many sports writers and broadcasters consider theirs to be the ‘Greatest Sports’ Story!’ The best thing is that it is still unfolding before us.

Clarey, C. (2017, January 26). A final match for Venus and Serena Williams, but maybe not the last one. The New York Times. Retrieved from https://www.nytimes.com/2017/01/26/sports/tennis/williams-venus-serena-australian-open.html?_r=0

Thomas, L. (2015, March 23). A place in the sun: The return and withdrawal of Serena Williams at Indian Wells. Grantland. Retrieved from http://grantland.com/the-triangle/serena-williams-indian-wells-2015/