Bre Moorer is now a graduate student at Bowling Green State University, where she is studying Kinesiology with a specialization in Sport Psychology.  She is originally from Akron, Ohio, about forty miles south of Lake Erie.  Her primary sport interest is basketball – at the amateur and professional levels.

Former Spurs small forward Kawhi Leonard (below right) is now a Toronto Raptor.  The 2019 NBA free agency run this summer was rocky for the California native.  For the 2017-18 season, Leonard played fewer than 10 games due to an injury that team doctors in San Antonio missed.  At least that is what the reason was early on. 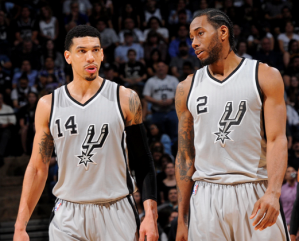 An injury to Leonard’s right thigh kept him out of 2017-18 preseason play, the season-opener, and the first 2 months of NBA action.  It should be known that Leonard was a major part of the San Antonio Spurs organization.  The former San Diego State standout lead the Spurs to their fifth championship in 2014, in addition to winning NBA Finals’ MVP for his outstanding performance.  How did he only play 9 games last season?  Shortly after his limited-minute comeback against the Dallas Mavericks in December, Leonard felt that he was being rushed back.

Leonard is known for his quiet and private personality, but fans could tell he did not feel confident playing yet.  Sometimes Leonard suited up, but most of the time he took a night or two off.  Leonard took it upon himself to travel to New York to get a second opinion on his injury.  He felt like he should have been 100% by then.  NBA analysts wondered why he would embarrass the Spurs staff by refusing the services offered to him for free and in his own backyard.  Leonard was portrayed by the media as bratty and just another professional athlete who was not patient enough after an injury. Sports reporter and well-known Spurs fan Michelle Beadle said Leonard did not have the qualities that a leader is supposed to have.  She even went as far as saying that he is coming off as an “obnoxious diva.”  Leonard took verbal beat-downs from fans, journalists, and social media for not playing and refusing to work with the Spurs team doctor.  Of course, the reserved NBA All-Star did not publicly defend himself, but his decisions would become clear to critics after teammate Danny Green told all.

Just like Leonard, Danny Green (above left) was traded from the Spurs to the Toronto Raptors this summer.  Seemingly before the ink could dry on his Toronto contract, Green said that his end-of-the-season physical examination revealed a torn groin that went undetected by Spurs staff, which lead to Green getting a second opinion while he was still a Spur.  Maybe it is because of the difference in personalities or the fact that Green still managed to play through his injury, but the general public was not as hard on Green for going elsewhere for treatment.  His Twitter mentions were filled with users that claimed getting another opinion on injuries is very common.  It was even discussed on ESPN that Green’s undetected injury may let Leonard’s actions off the hook.  In other words, now that Danny Green had a problem with the Spurs staff, we can believe Kawhi Leonard.

However you look at it, there is an issue that needs to be fixed in San Antonio.  It could be negligence or innocent lack of knowledge, but it is costing players their reputations, health, and market value.