As the final days left in the college football season start to dwindle down, this bowl season gave us all some great moments, players and story lines. Whether it was the Camellia Bowl or the Rose Bowl this season of bowls and the inaugural college football playoff brought a great end to what was (at least for me) a season where almost every Saturday was a great slate of college football games.

As this cap played out over the weeks the theme of how dominant the SEC is took a huge hit. Even though the SEC did go 7-5 overall as a conference, the mystique of the conference left many in the sports world wondering what happened since the conference only went 2-4 against ranked opponents. Even though the piece was full of satire the title of Clay Travis’s piece on Fox Sports was something of interest. The title read “The SEC is Dead, Long live the SEC,” yes it is over the top and it is supposed to be, but there needs to be a discussion on this topic; discussion on is everyone else finally starting to catch-up?

With the introduction of the playoff and new varying bowl match making, is the SEC starting to come back down a bit? I would agree with some analysts who say that the conferences are starting to show parody but to say the SEC is completely terrible now is something I won’t go forth in saying quite yet. It is better in the end to see that more teams are coming into the fold and we aren’t being completely hammered with how the SEC is better than everyone else. Parody no matter what the sport is makes it that much more enjoyable because it makes things more interesting and competitive, instead of seeing the same old same old year after year.

The SEC has their bad teams just like every other conference. For those still over sipping on the SEC kool-aid and notice that nasty taste in your mouth don’t look at me, instead look at the Big Ten and other conferences that crashed the party.

The perception change that happened over the past few weeks to the SEC could really put in full effect by one team slaying the SEC’s biggest giant.

The Ohio State Buckeyes went into New Orleans, LA and faced the big bully on the block from the SEC: Alabama. As big as a nine-point underdog, it looked like the magical run by the buckeyes was doomed to be ended with such force that it might as well not even be played. Isn’t that why we play the game though? You play the game to prove that sentiment that the underdog has no chance wrong and for the buckeyes they did just that. Even though they got down early in the game, the buckeyes showed that they had the heart to win and continue their magical journey. The journey though still has another huge task in the way.

Monday night puts the end to all the talk on who the best team is in college football. Finally with the playoff we all will know that there is a definitive champion. Oregon off its impressive win versus FSU showed how potent their offense is and that the talk of them being “finesse” is something far from the truth. As mentioned above Ohio State looks to cap off an impressive season full of adversity by winning it all and showing what it means to be a complete team. It will be interesting to see these two teams play since both teams are full of great players and coaches. Making this game a battle more than just a physical one on the field, but one that is a mental chess match as well.

For the way this season will come to an end it pushes the old phrase “don’t drink the kool-aid” to the front. For all that we heard that the majority trend for people was to lean one way or the other (mainly on SEC teams), it truly shows at the end of this season that putting your full confidence towards one frame of mind is almost foolish. It also has shown that to essentially “drink the kool-aid or go only off of the thoughts of the majority,” is a habit we all need to break. To say I’ve been insusceptible to this would be foolish too, but I will say for the majority of this season I stayed away from the punch bowl so many others drank out of.

Hopefully next season we all can stay away from the kool-aid and make our own thoughts. Until then don’t drink the kool-aid too much…you’ve been warned.

During ESPN’s College Gameday this past Saturday, there was a moment where I had to stop watching to check and make sure I hadn’t accidentally turned my TV to The View. The show which has become widely popular for the dramatic way that Lee Corso puts on the mascots headgear of the team he is picking to win the big game of day had some extra drama in this weekend’s show.

As the gang was getting set to start making their predictions for the day the main host of the show Chris Fowler decided to address the acquisitions of ESPN having an SEC bias, a topic that does not sit well with fans or ESPN.

We’re all used to seeing the calm and collected Chris Fowler comment his opinions on the matters at hand with very little emotion, so it was quite a shock to see how worked up he was over this topic.

Fowler wanted to make it known that ESPN does not feel they have an SEC bias nor do they want to see the SEC or any conference for that matter run the table and take up all of the spots in the new playoff system. While ranting about how tired he is of seeing these reports over and over again he even referred to them as “stupid”, not a terrible word for that matter, but a word that we would not expect to hear come out of Fowler’s mouth.

Fowler continued to make his case by saying that it would be much beneficial to ESPN for the teams that will make up the playoff to come from all different conferences covering the different regions of the country. This way fans from all over the country would be watching the games, not just fans from one area which would help ESPN gain more viewers from all over.

Although Fowler made many good points throughout his rant, the reports in which he claimed were “stupid” also make many great points as well.

It’s as though for the past few years that almost every time we turn on our TV’s on Saturday morning College Gameday is in SEC country, and if some reason they are not, they still spend the majority of the segment talking about the games within the South Eastern Conference for that day.

Yes the SEC does typically have very high ranked team’s week in and week out, but it often feels like ESPN has completely forgotten about the other conferences.

Take for instance the Big 10 Conference this past weekend. Ohio State who is one of the highest ranked teams in the nation and Big 10 Conference, played one of the toughest games on their schedule this season against Penn State. Even though Penn State is not an elite team this year, a Happy Valley white-out at night is one of the toughest environments for any team to play in. This game had the perfect set up for the College Gameday theme, but instead where did they end up again? The SEC.

Don’t get me wrong, the LSU/Ole’ Miss game was one of the most important games of the season let alone weekend, but when you are trying to defend yourself against this so called “SEC bias” it would have been a good idea to take the open opportunity to check out some of the B1G action.

It is clear that each side here has a very strong argument and will continue to defend their opinions throughout the rest of the season and possibly onto many more seasons to come. It will be interesting to see if there will be any more rants on College Gameday from Fowler or any of his colleagues, but for the time being let’s all just take a deep breath and leave the roundtable drama to the ladies of The View. 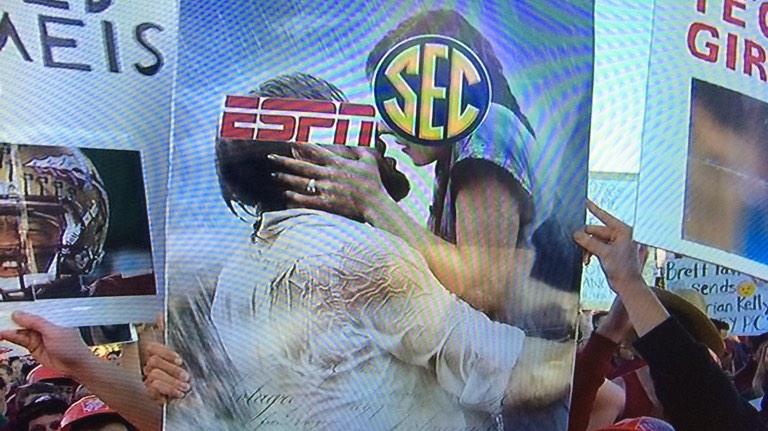