For the second year in a row, I was fortunate enough to be selected to work at the Super Bowl Experience as a member of the BGSU Sport Management Alliance. Last year’s trip was one of the best experiences of my life, and I had very high expectations for this trip. I wanted to take advantage of everything that Atlanta offered and genuinely soak in the experience. For much of last year’s trip, I was shell-shocked by the enormity of the entire spectacle, so I did not take much time to step back and think about how lucky I was. We had a slightly more relaxed schedule this year, so I had some time to literally sit down and soak it in. 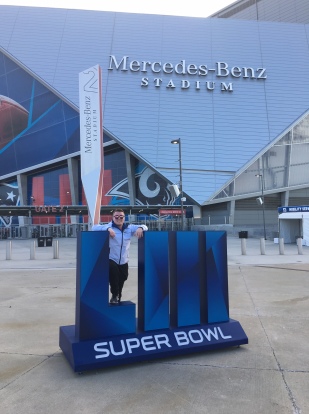 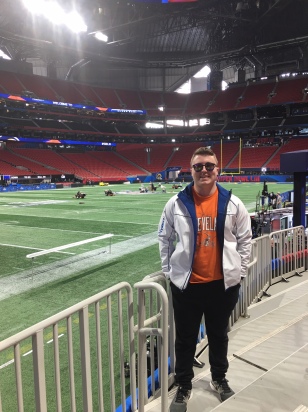 I worked at the fan experience on Wednesday and Thursday, helping the guests at some of the attractions. My shifts included the NFL Draft Simulation, Champions Ring Display, and Punt Return Simulation. Each one offered different opportunities for different fans, so I was able to talk to and interact with fans of all ages. Many fans were proudly dressed in Falcons gear, with some Patriots and Rams fans spread throughout. Other popular teams included the Steelers, Panthers, and Saints.

On game day, my official title was “On Location Experience Wayfinder.” I was stationed directly outside of the pre-game party entrance, directing guests to their parties. There were three separate parties, so I had to inform the guests which direction their specific party would be. Unlike last year, this did not occur in the stadium, so we did not get to stay for the game. While this was a letdown, we knew in advance it was unlikely we would work inside the stadium. Fortunately, our credentials allowed us to enter the stadium on Saturday, which was our day off. 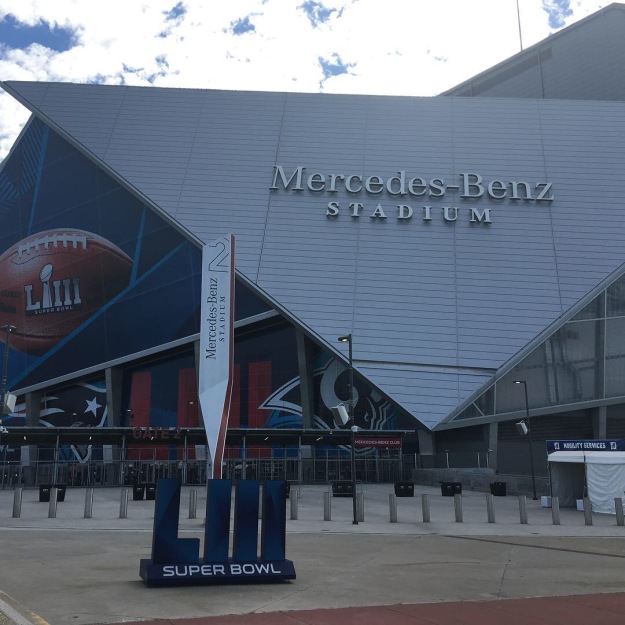 The main entrance to Mercedes-Benz Stadium

Mercedes-Benz Stadium is truly breathtaking, especially when it is prepared to host the biggest event in American sports. We were not allowed on the field, but we could get as close as the first row in the corner of the end zone. After taking a few pictures there, I decided I had enough time to trek to the top row and get the best view of the stadium. I spent about 20 minutes sitting in the top row, soaking in the view. I thought about how blessed I was to be able to be on this trip, sit in the stadium, and be a part of another Super Bowl.

My panoramic view from the top row of Mercedez-Benz Stadium

There are countless aspects that go into the planning and execution of the Super Bowl, but I particularly wanted to observe the media’s presence throughout the week. Media Day occurred on Monday, which was before we began traveling. I saw some of the highlights online, but they appeared to be the typical question and answer interviews that happen every year. During the week’s festivities, I witnessed several media members actively creating content.

One thing that stood out to me at the Fan Experience was the massive number of reporters. They often walked around with a camera and microphone, looking for interactive events and passionate fans. Some fans were interviewed, others were filmed while they participated in events. A handful of reporters participated in the events themselves, microphone and all. On gameday, I noticed a separate entrance for those with media passes. Security was extremely tight, so I assumed the area was reserved to screen the equipment being brought in by reporters, journalists, or photographers.

My biggest takeaway from the week was how important it is to pay attention to every detail, no matter how big or small. It could be making sure the case surrounding the rings is secure or making sure a local news reporter is able to get a clear shot of the Lombardi Trophy. It could also be taking a picture of a Falcons fan next to a replica jersey or directing a fan to the NFL shop. Our goal was to provide a unique and memorable experience for each fan, so maintaining enthusiasm and positivity were incredibly important during our long shifts.

My personal highlight occurred at Super Bowl Live, an outdoor event that was free to the public. Among the attractions was an interview stage, and I stood in the fourth row while Browns quarterback Baker Mayfield was interviewed by Fox Sports’ Jay Glazer. 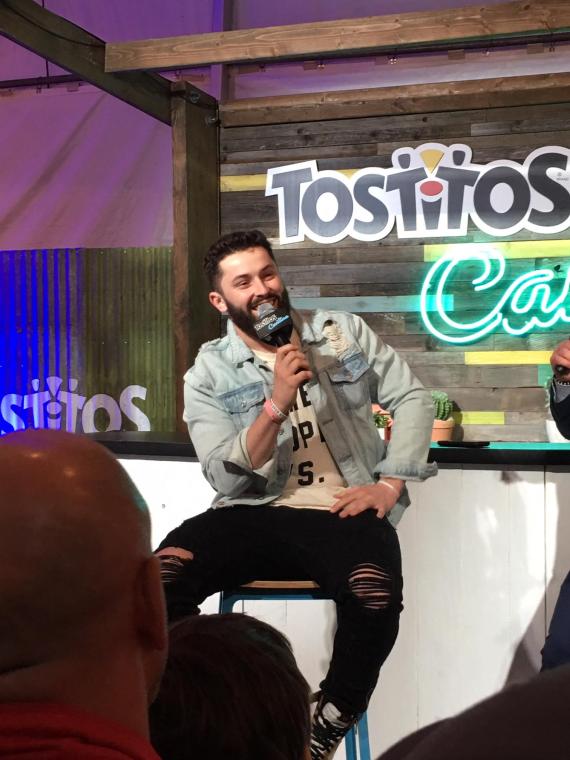 I was in awe of the presence of both men, one being my favorite athlete and the other being one of my favorite NFL media members. Witnessing a live media event from a close distance was remarkable, especially considering the people who were involved. This singular event was my favorite part of the week, but the entire experience is something I will never forget.

I would like to thank BGSU and the Sport Management faculty for preparing our group for the trip, we could not have done it without your expertise and support! I would also like to thank Cory Radebaugh and the rest of the Sport Management Alliance for organizing everything, their hard work and dedication made the trip a success! Finally, I would like to thank friends, family, and the community of Bowling Green for supporting me and my classmates, we are grateful for everything you do for us!