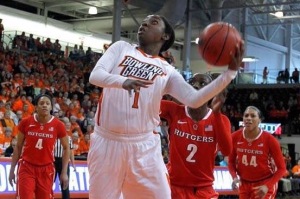 The entries that we post on Maxwell Media Watch typically focus on critiques of the media with suggestions for how they could do better. This post will be different since it recognizes the outstanding work of several area media outlets that have shared the story of a former BGSU student and basketball stand-out. Thanks to a story that appeared in the Toledo Blade (Briggs, 2019) and another that was broadcast on WTOL (Paley, 2019), tens of thousands of dollars have been raised in support of a woman who needs a miracle.

If you follow BGSU Women’s Basketball, you may be familiar with Jasmine Matthews (Jazz), who played on the team from 2011-2015. The Toledo Blade writer David Briggs (2019) described her as “the picture of athletic grace, a sweet-shooting guard for the Bowling Green women’s basketball team” (para. 1).

Jazz was a Sport Management major as an undergraduate and decided to continue her education by pursuing a Master’s degree in Sport Administration. I was fortunate to have Jasmine in my classes as both an undergraduate student and as her graduate adviser.

I vividly remember the day that Jazz told me what she decided to do for her Master’s Project. She had been talking to her godfather (Gerald) who was the head coach at Trinity Valley Community College in Texas. Gerald knew that Jazz had been contemplating a career in coaching after she finished her master’s program.

But he had a better idea.

At first, Jazz was skeptical about the suggestion. But as Gerald talked to her more, he began to convince her that her training and knowledge of the game, plus her fitness made her a prime candidate to succeed as a basketball official. She could get experience at an entry level, and if she did well, she could eventually advance to Division I women’s basketball.

Once she was convinced, Jasmine pursued the idea with all the vigor of a motivated athlete who suddenly sees the big picture and trains hard to prepare for the biggest game of her life. Better yet, her godfather’s suggestion gave her an idea for what she could do for her Master’s Project.

As Jazz filled me in on what she wanted to do with the rest of her life, she explained how it related to her idea for a final project. She wanted to write about her experiences in becoming an official. We discussed the idea of doing an autoethnography, which would enable her to integrate her personal experiences with literature about her potential career path. She even found an autoethnography by another woman who had played basketball in college – Claire Schaeperkoetter (2016), whose article on “Basketball officiating as a gendered arena” became the template for her to examine and reflect upon her own experiences.

In December 2016, Jasmine completed her project and received her Master’s degree.

A year later, she was diagnosed with MS, “multiple sclerosis… the insidious disease with no cure that attacks the nerve cells in the brain and spinal cord” (Briggs, 2019, para. 6). Within three weeks, she had lost everything, and was completely disabled (Paley, 2019).

Jazz has made progress in fighting the disease, but she needs support to take the next step in her journey. Thanks to a doctor who lives near her home, Dr. Richard Burt, she is a candidate for “the use of stem cell transplants to treat” her (Briggs, 2019, para. 15). But the treatment is expensive and her insurance does not cover it. Therefore, Jazz set up a GoFundMe page on Facebook to raise the $125,000 needed for the treatment. Nearly $60,000 in donations have already been contributed by 790 people, as of this writing.

Jasmine’s dream to become a basketball official is still alive. She concluded her interview on WTOL by saying, “Once I get my life back I plan on being a Division I official, referee” (Paley, 2019, para. 14).

Jazz has only begun to write her story, and I cannot wait to read the next chapter!

Briggs, D. (2019, February 12). As a former BG player hopes for a ‘miracle,’ a basketball community rallies. The Toledo Blade. Retrieved from https://www.toledoblade.com/sports/bgsu/2019/02/12/former-bowling-green-falcons-player-jasmine-matthews-battles-multiple-sclerosis/stories/20190212137