Amid an off-season of disaster, the Cleveland Browns appeared to give fans a crack of light in a dark tunnel they currently reside in. The new logo was to represent the new era of Cleveland coming off a season in which the Browns saw tremendous flashes of potential and a great start to the season. Of course, the great start to the season that once looked like the biggest Christmas gift under the tree ended up being just a broom as our hopes got swept under the rug along with the rest of the dust.

Despite the bitter ending, the start provides hope for us Cleveland Browns fans this season. Joe Haden has become the perfect image for our franchise as he’s transformed into a team leader. He brings intensity, respect and freshness. The word “fresh” is a term that recently describes our team well as we’re finally building in the right direction as our record improved.

We’re a young, fresh squad and we have potential on the roster to compete with a deteriorating division. The logo change was one that would define the Cleveland Browns organization for years to come.

And then early Tuesday morning the logo was revealed… it was the same logo just a different tint of orange. Now I know many enjoy the idea of bringing the elf back, however in the contract for new Owner Jimmy Haslam, it states two things regarding the look of the Browns. One, the elf could not be brought back. Two, whatever the logo may be it can’t be on our helmet as we wanted to remain the only team without a logo on our helmet.

Rumors of Paul Brown being heavily incorporated in the logo ran wild, and I liked the idea. Why not incorporate the legendary Paul Brown who brought years of glory to Cleveland. But of course the Cleveland Browns put up the curtain and the crack of light disappeared once again.

Sticking to tradition, the new and fresh logo turns out to be the same old and traditional one. This decision may not have been the favorite of many fans, but after all of the years of suffering this traditional Cleveland Browns look deserves a taste of victory. It’s the Cleveland way and it represents our crazy (or as we call ourselves “passionate”) fans. There was a little gift to the fans however, as they added a logo for the infamous Dawg Pound. 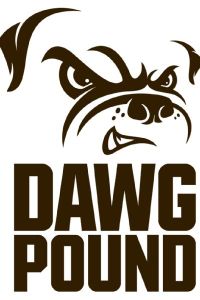 Despite repeatedly having a broken heart after every season, us Browns fans still tune in every single game to watch. The fans never break the tradition of being a loyal and passionate fan, so we must remain loyal and passionate to our teams image and logo. Besides, the uniform changes won’t come until April, so that light is still there.